The River Mersey circa 1960, when I was growing up in Liverpool.

So where did ‘my’ music come from?

Well, there were lots of influences! When I was growing up, Liverpool was still a busy, bustling seaport, full of ships on the river and work in the dockyards. When the wind was blowing north off the river I could sometimes hear the sound of ships’ horns on the Mersey, carried up to the Clubmoor housing estate on the breeze. On foggy days, the stillness would occasionally be pierced by the melancholy sound of a ship’s fog horn, almost as if it were just behind the houses opposite rather than a couple of miles away on the river.

And when I got the bus into town and got off at the Pier Head there was the incessant, discordant music of the seagulls – the call of the sea. I grew up with the sounds of the river as a background to my life, with the ‘music of the Mersey’ playing, often subconsciously, in my mind.

At home, my mother sang her way through the housework each day and, being a devout Catholic, she had a repertoire of favourite hymns that she went through. To this day I sometimes find one of these surfacing in my mind – ‘O Maria, O Maria’!

One of my first musical recollections is sitting on the floor in the front room of my grandmother’s house as a small child, surrounded by old ‘78’ records, ‘helping’ my aunty choose music for the mimes and ballets she produced for the girls of St Mary Of The Angels School in downtown Liverpool, where she was headmistress.

One of my uncles (another headteacher!) played classical music on the piano with seemingly effortless skill. Family lore had it that he could have been a concert pianist. And my brother Mike had a most beautiful boy-soprano voice: if I close my eyes and keep very still, in my mind I can still hear him singing ‘Stille Nacht’.

So there was certainly plenty of music around in my life but it was long after my childhood that I first became musically creative. I’d always been handy writing words – you know, letters, articles for newspapers, poems and the like – and when I was working at St John Fisher Primary School in Knowsley Village, I decided I wanted to take this further and write a musical play for the children to perform. However, I had no idea whatsoever how to write the music for a song – so I was stuck!

Enter a wonderful friend and colleague, Claire Morris, from Knowsley Borough’s music and drama team! I had originally asked Claire to help me with ideas for music lessons and during one of our conversations I mentioned my frustration with my proposed musical project. Going out to her car, she returned with a strange kidney-shaped musical instrument called an Omnichord. Simply by pressing buttons I could create chord sequences to match the lyrics I’d written: amazing – at least jt was to me!

And that ‘s how I got to write my first songs and my first children’s musical, ‘The Rainbow Maker’, performed by the children of St John Fisher Primary School in my last year there as deputy headteacher. 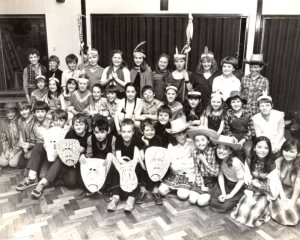 From there I went on to St Aidan’s in Huyton and wrote more songs and more children’s musicals. I took an extended ‘sabbatical’ from song writing to get married and raise a family but now I’m back again and loving it!

So that is where my music comes from – at least, as far as I know! I’m reminded of John Lennon’s comment about composing the amazing song ‘Across The Universe.’ He said, ‘The words….were given to me….I don’t own it, you know; it [just] came through.’ And it’s the same with me. I only know that the music comes from somewhere inside or somewhere beyond me – and that I now offer it to you with love from Liverpool.

Frank Ravey – With Love From Liverpool